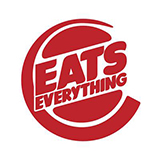 Daniel Pearce, better known as Eats Everything, is an English producer and DJ from Bristol. He came to prominence in 2011 with the release of ‘Entrance Song’ on Pets Records in 2011. Since then he has received critical acclaim for a number of solo releases on Dirtybird, Hypercolour and Futureboogie. Dan’s productions combine house music with a wide range of other genres such as UK bass, garage, techno and jungle. Early career Dan began his DJ career as a resident for the Bristol night Ripsnorter then Scream in the early 00s, as well as playing some gigs in Europe. It wasn’t until 2011, when ‘Entrance Song’ was signed to Pets Records, followed soon after by a release on Claude Von Stroke’s Dirtybird label that Dan’s career as a DJ began to gain momentum. As a DJ Since 2011, Dan has played at a number of the worlds biggest clubbing institutions such as Fabric, DC10, Amnesia, The Warehouse Project, Space and Watergate, as well as festivals like Glastonbury, Bestival, Creamfields and Secret Garden Party. He has received much support from BBC Radio 1’s Pete Tong, who has asked him to do three Essential Mixes since 2011, the most recent of which was a live recording of Pete and Dan b2b at The Warehouse Project in 2013. In 2014 Dan was booked to be the first ever resident at XOYO in London. The three month residency will saw him play every Saturday for 12 weeks. Dan has also received a number of accolades as a DJ. In 2012 he won ‘Best British DJ’ in the DJ Magazine ‘Best of British Awards’. In addition to this, in December 2012 he was the highest new entry in Resident Advisor's prestigious ‘Top 100 DJs Poll’ coming in at number 13. As a producer Dan has had a string of critically acclaimed releases on Pets Records, Dirtybird, Hypercolour, Futureboogie and Crosstown Rebels. He has also released remixes for a broad selection of labels, giving his distinctive take on tracks by the likes of Adam F, Jamie Jones, Totally Enormous Extinct Dinosaurs, Chicken Lips, X-Press 2 and Four Tet. He has also collaborated in the studio with the likes of Totally Enormous Extinct Dinosaurs, Justin Martin, Skream and Lukas as well as the singer/songwriter Sinead Harnett. In 2011 Dan was awarded ‘Best Breakthrough Producer’ in DJ Magazine's ‘Best of British Award’