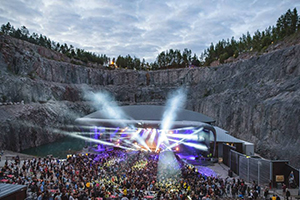 PARTIES WILL BE HOSTED IN ESTONIA, SWEDEN, SOUTH AFRICA AND BEYOND

Into The Valley’s launch in 2015 marked the arrival of Europe’s most stunning new festival location, the Dalhalla quarry in Sweden. Featuring a line-up almost as striking as its setting with the likes of Ricardo Villalobos, Dixon and Helena Hauff on the bill, the festival caught the attention of a large number of partygoers from all over the world across its two-year stint in Dalhalla. With its third year approaching, Into The Valley has now announced plans to move the festival away from Dalhalla, citing a desire to keep the festival experience “exciting and unexpected”. The new location will be the Rummu quarry just outside Tallinn in Estonia, which again boasts crystal blue waters and surrounding greenery, and additionally features a former prison, with the festival scheduled to take place from June 29 to July 1, 2017. Plans for five more festivals across sites spanning the globe have also been revealed. Into The Factory marks a second Sweden location, at the Stora Vika industrial park 68 kilometres away from Stockholm, and will run later that summer from August 10 to 12. Moving into January 2018, Into The Castle will see the organisers head into the Southern Hemisphere, with a two-day party taking place in South Africa's oldest construction that’s still maintained, The Castle of Good Hope in Cape Town. The spot is allegedly haunted by the ghost of a former guard who committed suicide within the building. Full details of the three further locations are currently unannounced, although founder Mattias Hedlund has revealed to RA that they are "tentatively planned to be implemented in Southern Europe, Asia and South America". Head to musicgoesfurther.com for further information, including ticket details, and check out some striking photos of the three announced sites above.