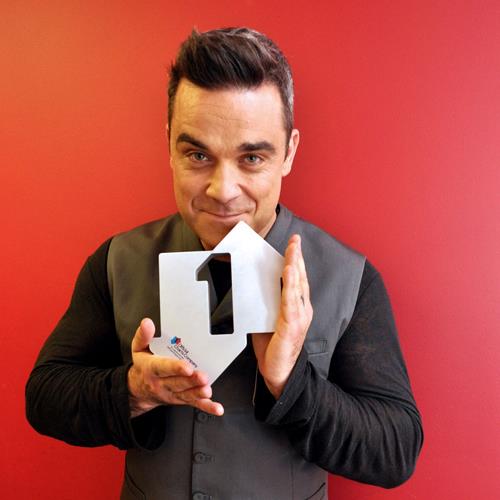 Robert Peter Williams, known as Robbie Williams (Stoke-on-Trent, February 13, 1974), is a singer-songwriter, musician and British actor. He began his musical career in 1990 as a member of Take That, which soon became one of the bands most successful and renowned of the period. He left Take That in 1995 to begin a successful solo career. Despite not enjoy great popularity in the United States, sales of its publications affect as many as 80 million copies, placing eleven albums and nine singles in the top of the charts in the UK and has received numerous awards and victories, including 17 times those of the BRIT Awards . In 2004 he was inducted into the "UK Music Hall of Fame" and elected the most important British artists of the nineties. In 2010 he returned to be part of his historical group, to resume his solo career the following year.  Williams entered the Guinness Book of World Records for selling 1.6 million tickets in one day for the world tour of 2006. Williams is the artist with the most wins at the BRIT Awards, having received almost twice as many statuettes than any of the award-winning artists. The career of Robbie Williams with Take That began, British pop group formed in 1990 whose extraordinary popularity led to the flourishing of many similar groups in the UK. However, since the beginning of the character rude Williams he hindered its successful integration into the group and, in fact, Robbie often quarreled with his friends and with their agents. Robbie was expelled from the group in 1995 for his conduct just correct, which detracted from the image of "good guys" built by Take That. A few months after the departure of Williams from the group, Take That disbanded. ITV1 in November 2005 showed a documentary about Take That in which he explained why Williams left the group with the same singer and interviews with other members of the band. Also in 2005, Take That have reformed, without the participation of Robbie Williams. In 2010 he returned to the group with which he writes and brings out the album Progress and a new edition entitled Progressed in 2011 in view of the new Progress Live 2011 that found the five components together after 16 years.After leaving Take That Williams is immersed in a lifestyle very eventful, as evidenced, even according to the average, a certain excessive bravado and a controversial appearance at a performance of Oasis at Glastonbury in 1995. This situation soon led Williams in a tough fight against drugs and alcoholism, during which fattening of 18 kg and was often seen in public poorly dressed, dirty and bearded untreated. After a violent argument with the group Oasis, whose newspapers have thoroughly discussed, Liam Gallagher began to call it "the obese dancer from Take That". At that time the media and tabloids and British predicted that the bad boy Robbie Williams would never have been successful as a solo singer.