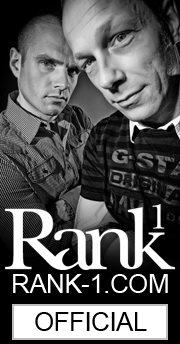 In 1997 Piet meets Benno de Goeij at a party. They discuss their passion for music all night long. Benno has no experience at all in producing, but he has a perfect ear for good melodies, due to his classical musical background by playing the piano and the keyboard. They decide to cooperate and the first releases as Pedro & Benno soon follow. Their records are put on the decks by numerous DJ’s and they are asked for remixes by Jean, Ferry Corsten and Cygnus X. But it is their own ‘Airwave’, the theme of Innercity Hollands biggest indoor danceparty, that puts RANK 1 really in the spotlights. Their remix of Cygnus X’s ‘Superstring’ was last years Sensation theme. The images of the videoclip, recorded at the event in the magnificent Amsterdam ArenA stadium, nowadays find their way through whole Europe and are to be seen in countries such as The United States of America, Japan and South-Africa as well.

As for 2001, RANK 1 has a tight schedule. First of all there is the soon to be expected album. One of the tracks, ‘Such Is Life’ the Sensation 2001 anthem, was released in july and climbed the charts with the speed of light. This track already differs from the style RANK 1 got famous with. And this will be continued on the forthcoming album on which Piet and Benno will demonstrate their variety, making it not just an album for the dancefloor but one to listen to at home as well.

When it comes to interviews, RANK 1 is mostly reluctant to get into details. They rather let their music speak for itself, since they consider themselves as ordinary guys. With a lot of musical talent that is…