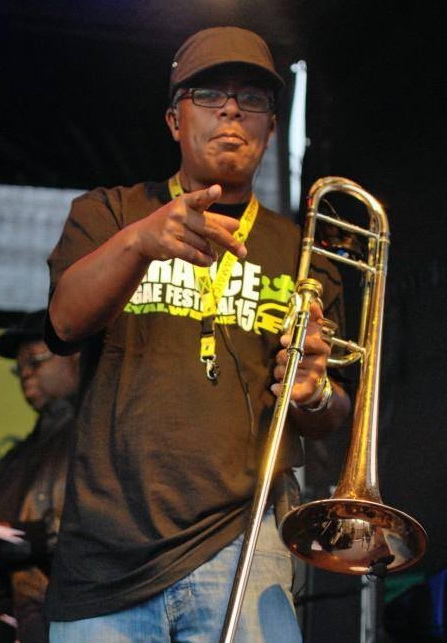 Internationally known as Matic Horns, Henry "Matic" Tenyue is an accomplished and highly sought after session musician whose distinctive trombone sound can be heard on many roots and dub works produced by UK producers such as Ruff Cutt, Stingray, and Mafia & Fluxy and the aforementioned Gussie P. Over the years Gussie P, who knows Henry Matic from his early childhood, has released quite a few -- often hard-to-get -- 7", 10" and 12" singles and compilation sets which featured tracks from Matic Horns. But now Henry Matics' mastery can be heard on this long-awaited "400 Years" album, on which he blows hard across some of Gussie P's tuffest Steppers and One-Drop riddims, laid by Mafia & Fluxy, Marley, Chris Lane, and Gussie P himself. Each roots instrumental and its dub version is given the Gussie P treatment, i.e. expertly mixed hard edged roots tracks, with on top Henry Matics' beautiful trombone playing. As each track has its own merit, it's almost impossible to point out standouts. So lets just mention our personal favourites, which are "400 Years Of Dub", "Sabayindah" and "Call Of El Shadday". In the latter one can hear Henry Matic blow the first (lyrical) lines of Van Morrison's "Moondance". All in all an album which is worth of hearing from beginning to end... and then... pull up and come again!! If you're lucky to come across this Matic Horns albums don't hesitate to buy, because it might be your only chance to purchase these marvellous collections.