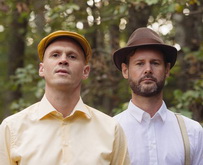 Norwegian duo Ost & Kjex have gone a long way: From their debut album “Some But Not All Cheese Comes From The Moon” (2004), which consisted entirely of sounds originating from cheese and biscuits, over their much acclaimed spicy second long player “Cajun Lunch” (2008, released on Diynamic) and many collaborations with high-flyers such as Solomun (“Federgewicht”), Jamie Jones (“Summer Time”) or H.O.S.H. (“Woo Hoo”), they have grown to become one of the few acts that perfectly bridges the gap between Underground Electronic music and Indie Pop Music.
Ost & Kjex found people liking their music, but nobody really believed in their modus operandi, the exclusive use of food as a sound source. In the blessed summer of 2008 the boys stumbled upon Solomun, the head honcho of Diynamic. A chance meeting resulting in a collaboration track called "Federgewicht", which was their entrance to his highly acclaimed record label.
Hailing from quiet Oslo, there is much time on hand to invest into the more important things in life: Making babies and making music. After about five years since their last album release, lots of touring and working on their signature sound, the two Norsemen decided it was time for another album. “Freedom Wig” is the title, and it can mean many things: I could be a name for the room you escape into when you listen to music. It can be a metaphor for the sometimes false freedom we feel when we live our quite predictable and structured lives. Or it can simply be a party hat you put on.
On their continuously evolving path they have made quite a few stops at places that might sound familiar to you, such as Fabric (London / UK), Panorama Bar & Watergate & Kater Holzig (all Berlin / DE), The Villa (Oslo / NO), Badaboum (Paris / FR), Culture Box (Copenhagen / DK), The Cat & The Dog (Tel Aviv / IL), Destino & Beachouse (Ibiza / ES), Indigo (Istanbul / TR) and many more.
In a scene that is ever so grim it is quite refreshing to see someone with a wink and a smile in their face, and this is what Ost & Kjex have always been about: Bridging the gap between ecstatic live performances in sweaty night clubs and the grandeur of not taking yourself too serious.