When Tedd Patterson steps to the decks, there's a shift of energy in the room. In a club scene now flooded with McDJs, Patterson has a presence that sets him apart. Instead of staying under the umbrella of only a couple of dance music genres, Patterson creatively moves things along by introducing the unexpected to the mix. This is his art form of fusion which has solidified Patterson's reputation as a master craftsman of adventurous, relentless, and wildly dynamic sets. With a honed eclectic sound and purposeful experimentation, Patterson's preference for the genuine, varied side of music is truly a refreshing experience. What makes Patterson's sound his own is the alchemy of an off-beat perspective, an insatiable desire to explore various musical textures, and his refusal to be confined into any particular style. This ability to challenge himself and experiment with forward-thinking, energetic sets is rooted in the traditions of the 1970s disco he grew up with in Georgia. When Patterson landed in Atlanta he began rocking the club scene playing all styles of dance music. He played at several notorious underground haunts frequented by friends/soon-to-be famous club personalities Larry T., Lady Bunny, and RuPaul--to name a few. In 1985, he was granted the coveted (and much-deserved) position as a Billboard reporting DJ (a position held until 1991), validating his hard work and growing success. But when he discovered the burgeoning house music sounds emanating from New York and Chicago, his career took off. Patterson launched a weekly residency dedicated to house music at Atlanta's now-famous club Colorbox and he quickly found himself playing to packed crowds. In the early 90¹s the groundbreaking dance label Emotive Records lured Patterson to New York to work their Promotions division, where he used his expert ear to identify new talent and emerging trends. The first artist he got under contract was DJ Pierre (Phuture Scope), who would release the dance-floor burners "Plastic" and "What is House Music" on the label. A series of guest DJ spots followed and Patterson quickly established himself as a New York DJ, earning his place in the booth at crucial New York hotspots like Club USA, Limelite, Save The Robots, Crowbar, and Sugar Babies. Soon Patterson was fulfilling similar promotions / artist development roles for the newly established Liquid Groove imprint, and with the experience of these two labels under his belt, Patterson was in touch with a range of influential club DJs, radio jocks, and venues around the world. It was only a matter of time before Patterson was offered regular spots at some of the most prominent clubs around the world including London's Ministry Of Sound, Pacha in Ibiza, and Ageha in Tokyo. This notoriety made Patterson, with his acclaimed edifying and soul-satisfying sets, a pivotal player in the now legendary Miami Winter Music Conference's *Magic Sessions* parties, and he eventually began releasing music of his own. He hasn't stopped since, and never has he shaken the ethics of those halcyon days of the current club scene: bring integrity, individuality, and a forward-thinking approach to the music you play and the style you play it with. These traits make Patterson a rare talent, as there aren't many DJs diverse enough to play for Victor Calderone at his *Evolve* party, while also being Danny Tenaglia's guest DJ at a *Be Yourself* night, and then spin at Danny Krivit's *718 Sessions.*     Today, Tedd Patterson is a reflection of this experience and exposure, combined with a daring confidence to take chances and inject the unexpected. Years and scores of releases later, Patterson continues to craft intensely varied grooves and pack dancefloors--as evidenced by his eight-year running, monthly Saturday night *Vibal* residency at New York's premiere hotspot Cielo. And, looking to capture the sweeping musical range of these Cielo nights, Patterson's own record label, Vibal Records, is remerging in 2011, complete with a podcast (Vibal Cast) to keep the world in the loop.  With Tedd Patterson in the DJ booth, it's best to prepare for the unpredictable. Any given set might start with some deep, heavy house, somehow make it's way to more hard-edged techno, and when the crowd has been coaxed to their breaking point, a mess of sweat and dancing, Patterson then takes them beyond their expectations, pushing past the conventional with his truly unique and eclectic style. Whether at a club in New York City, Naples, Italy, or Tokyo, Japan, this is what Patterson brings: knowledge of how to work a crowd, over and over, yet being able to make each night its own. 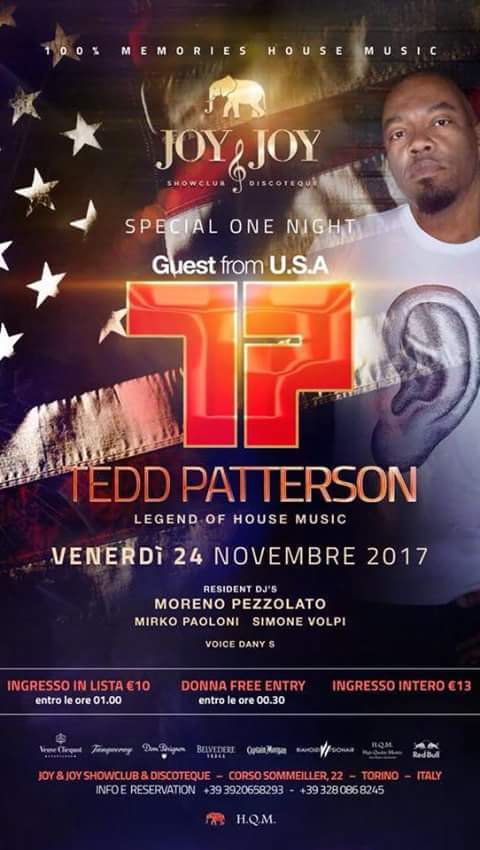